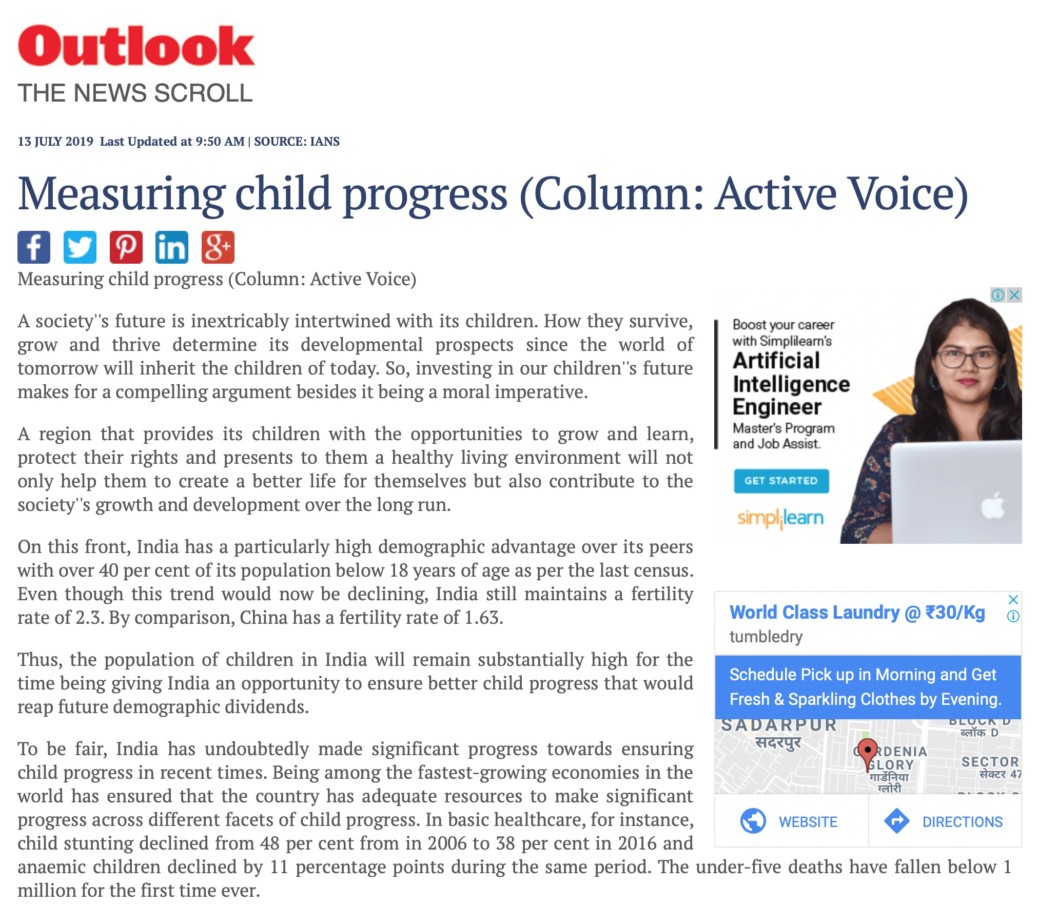 A society’s future is inextricably intertwined with its children. How they survive, grow and thrive determine its developmental prospects since the world of tomorrow will inherit the children of today. So, investing in our children’s future makes for a compelling argument besides it being a moral imperative. A region that provides its children with the opportunities to grow and learn, protect their rights and presents to them a healthy living environment will not only help them to create a better life for themselves but also contribute to the society’s growth and development over the long run.

On this front, India has a particularly high demographic advantage over its peers with over 40 percent of its population below 18 years of age as per the last Census. Even though this trend would now be declining, India still maintains a fertility rate of 2.3. By comparison, China has a fertility rate of 1.63. Thus, the population of children in India will remain substantially high for the time being giving India an opportunity to ensure better child progress that would reap future demographic dividends.

To be fair, India has undoubtedly made significant progress towards ensuring child progress in recent times. Being among the fastest-growing economies in the world has ensured that the country has adequate resources to make significant progress across different facets of child progress. In basic healthcare, for instance, child stunting declined from 48 percent from in 2006 to 38 percent in 2016 and anaemic children declined by 11 percentage points during the same period. The under-five deaths have fallen below 1 million for the first time ever.

If one looks at education status of the country, considerable progress has been made in universalising primary education, improving enrolment and completion rates, and addressing gender disparity. One of the other important aspect of child development relates to the personal choices. The fulfilment of these rights is compromised through early marriages and child labour among other things. India has been successful in significantly reducing early marriages that has resulted in a global drop in the number of child brides. These improvements have been made possible with the children centric policies and initiatives taken up the Indian government.

However, comparative statistics reveal that significant deficits in child development still remain. For instance, despite the overall literacy rate of India being 95%, around 64 lakh students are out of school during their primary schooling years which is higher than every other country except Nigeria. On the health front, India still bears 23.8 percent of the global burden of malnourishment and is home to 30 percent of the world’s stunted children under the age of five. The 2018 Global Nutrition Report revealed that India is not on track to achieve any of the WHO’s nine nutrition goals. Over the years India has suffered heavy economic losses due to these issues. For instance, it loses over $12 billion in GDP to vitamin and mineral deficiencies every year.

There is an urgent need for India to act upon these issues as the extent of gains to the country will be significantly far-reaching. Apart from the productivity gains of a well-developed future workforce, there are other indirect benefits of child progress. First, when children get adequate nourishment and proper education, they are less likely to depend upon public welfare later in life.

Second, with higher employability and employment comes a reduction in crime, which is not only a societal benefit in itself but also saves the state crucial resources that would have been spent in crime prevention. Finally, with more people entering the workforce and paying taxes, the rise in government revenue will accrue almost as future dividend for resources invested today into child progress. Thus, it makes immense economic sense for a nation to invest in its children and orient its policies towards their development.

It is also important to make early interventions in child progress as adequate health and education at a young age makes significant impact on their cognitive abilities, thus, determining their future productivity. It will not only have a profound impact on the learning capabilities and lifetime opportunities for children but will also create the human capital that the country needs to boost development in the coming decades.

To undertake such interventions, however, a data-driven approach is necessary as India envelops vast spatial disparities and a one-size-fits-all approach can hardly prove effective. Across the vast expanse of the country, it is hardly surprising to find inter and intra state variations in economic and social conditions. Thus, policy needs to be attuned to local conditions, which is it needs to be guided by data on a measure about child progress at all regional levels. Time we develop a child progress index and create a measurement tool that propels us to achieve better outcomes.

The article was published with Outlook India, The Weekend Leader , Millennium Post and The Quinton July 13, 2019.