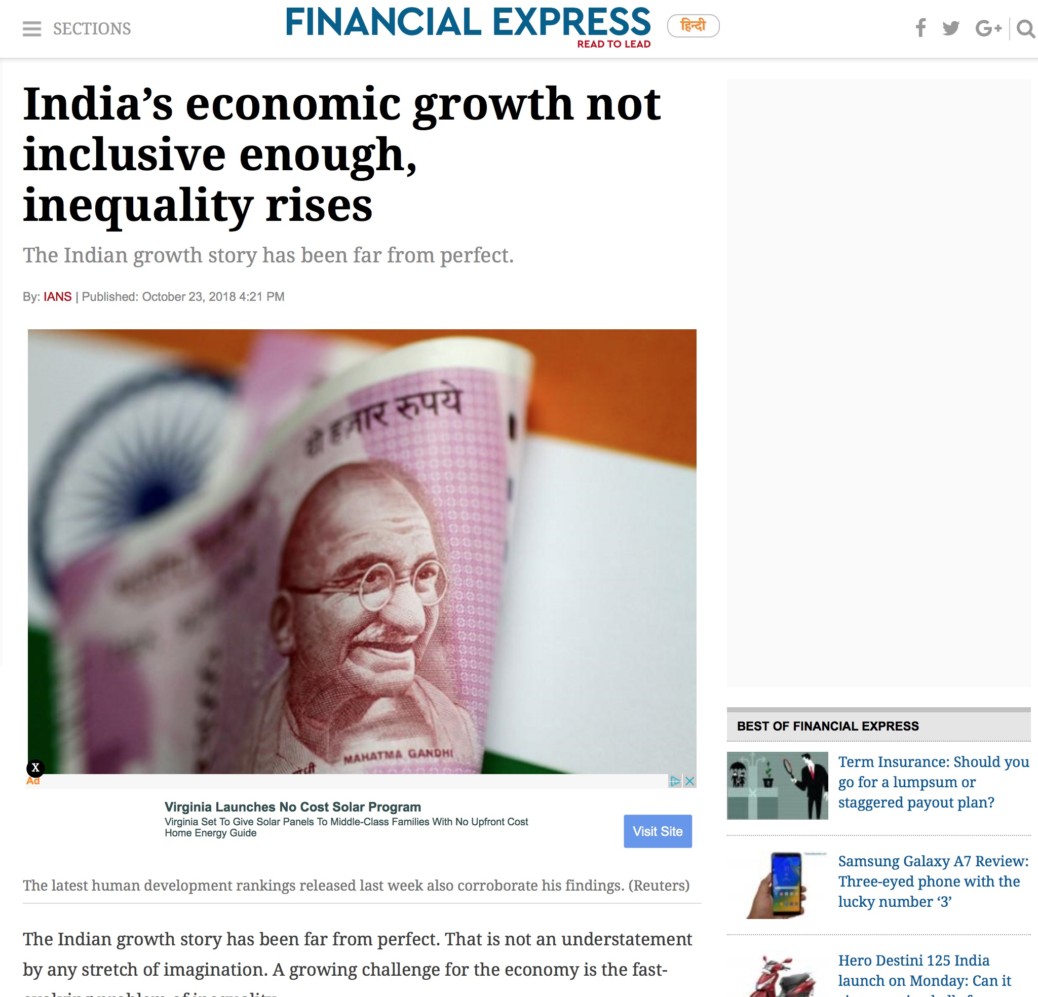 The Indian growth story has been far from perfect. That is not an understatement by any stretch of imagination. A growing challenge for the economy is the fast-evolving problem of inequality. Most recently, James Crabtree in his latest book, The Billionaire Raj, claims that “India is one of the world’s most unequal countries.” His claim is based on the fact that the billionaire wealth as a proportion of the entire country’s output is the highest for India, except for Russia. The latest human development rankings released last week also corroborates his findings. India already ranks a lowly 130 on the index out of 189 countries but when adjusted for inequality, the scores experience a drastic fall of almost 27 percent against a world average of 20 percent.

What explains India’s dismal performance on the inequality front? Why don’t other developing countries face a similar problem? To put it simply, economic growth in India has not been inclusive enough. All the hype about the country’s fast-paced economic growth has not percolated down through the economy. The recently-released Social Progress Index can provide an explanation on why that is so.

The Index, which measures the extent to which a country can provide for the social and environmental needs of its citizens, ranks India at 101; a position it had achieved as early as 2014. India is the worst performer among all the BRICS countries and performs poorly than quite a few other developing countries like Thailand, Sri Lanka, Philippines and Indonesia as well. The country’s abysmal performance on social and environmental aspects can explain its widening inequality to a large extent.

To first put things in perspective, the countries which are performing better on the Social Progress Index are managing to do so irrespective of their economic heft; that is, even economies that are poorer than India have ranked higher. But they have made it possible to have broad-based public participation in economic expansion by pursuing policies which allow for extensive schooling, higher literacy, better healthcare, widespread land reforms and greater gender parity. The only way to maximise the gains in poverty reduction for an economy is to make it more participatory, which is not easy to achieve if the webs of social barriers are not broken down through such policies. Economic advancement cannot be equitable if social opportunities are not enhanced on a wider basis.

China offers the perfect case in point for how a large economy can achieve equitable growth on a sustained basis. China was at the same economic level as India around 1980 when it undertook market reforms. At the same time, the country made investments in improving its basic education and health standards. When China soon became an export-led economy, the products did not particularly require highly skilled labour, but schooled and literate population nevertheless. The production of such basic manufactures for the world markets requires adherence to certain specifications and quality controls where good school education comes in handy. A healthy workforce is also imperative to ensure that economic schedules are not marred by illnesses and intermittent absences and that adequate productivity is maintained.

Thus, basic education, good health and decent environment are not only valuable constituent elements of quality of life themselves but can also aid in driving economic successes of the standard kind in a more equitable manner. India has missed the bus on that front. Surely it can continue to achieve high rates of growth with the rather limited bouquet of social opportunities that exist currently. In fact, a lot of complacency arises from the achievement of high growth rates on an aggregate level. But a status quo would only continue to widen the disparity across society that has already reached concerning levels. Most of India’s growth arises from industries which make excessive use of its historic accomplishments in higher education and technical training. The fruits of such a growth, therefore, are skewed on the wrong side of the income spectrum.

The problem with the inequality debate in India is that it is often argued that since poverty has dramatically declined in the country post-reforms, the trend of rising inequality should not concern policy-makers as it is a small price to pay. But, the fact that India is an outlier in terms of inequality among all developing countries, except an oligarchic Russia, should raise the alarm bells. Most importantly, if there exists a way where the gains from existing growth can be more equitably distributed, clearly that is the Pareto optimal path of development and worth striving for.