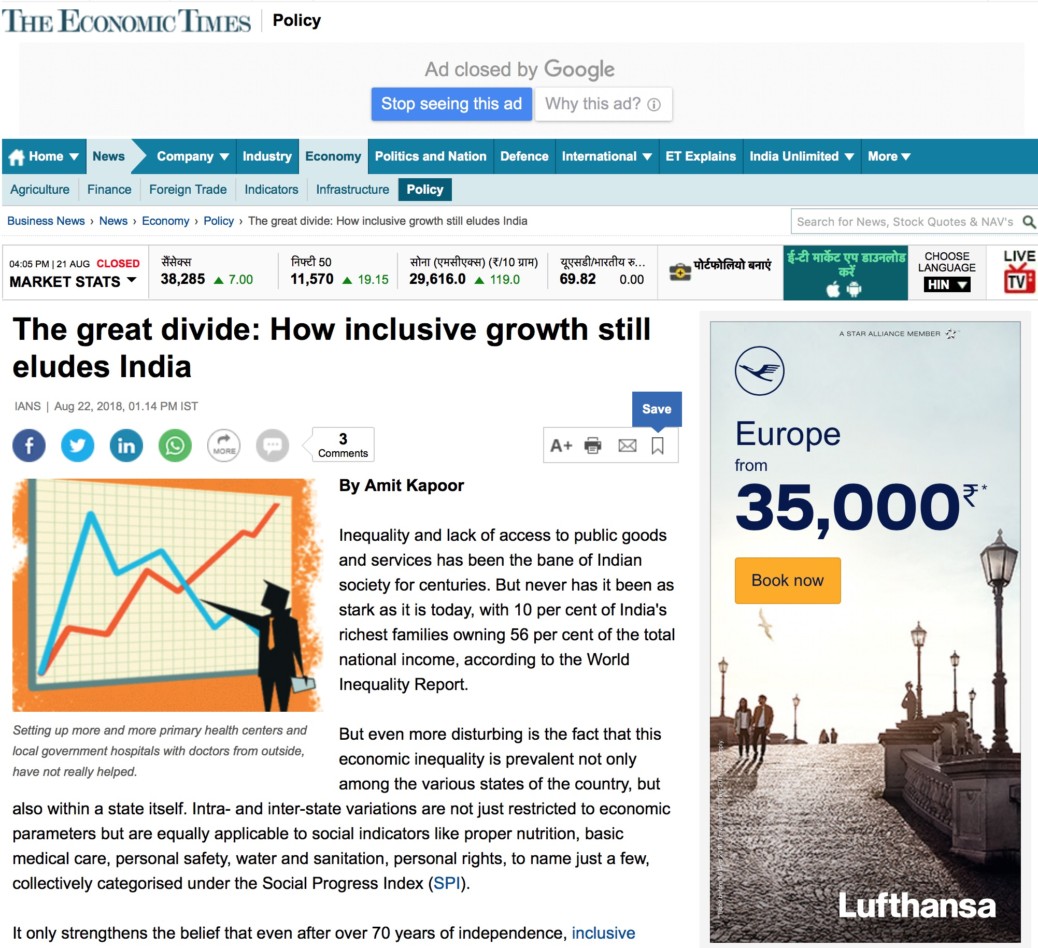 Inequality and lack of access to public goods and services has been the bane of Indian society for centuries. But never has it been as stark as it is today, with 10 per cent of India’s richest families owning 56 per cent of the total national income, according to the World Inequality Report.

But even more disturbing is the fact that this economic inequality is prevalent not only among the various states of the country, but also within a state itself. Intra- and inter-state variations are not just restricted to economic parameters but are equally applicable to social indicators like proper nutrition, basic medical care, personal safety, water and sanitation, personal rights, to name just a few, collectively categorised under the Social Progress Index (SPI).

It only strengthens the belief that even after over 70 years of independence, inclusive growth has remained elusive, calling for a serious policy rethink in terms of redistribution of wealth, equal opportunities for all and proper distribution of goods and services in the country.

Take the case of a rich and progressive state like Maharashtra with the greatest nominal GDP among all states. It too harbours a district like Nandurbar, which can easily be grouped with some of the poorest districts of the country.

For instance, the difference between the economic density, which is the GDP per square kilometer as defined by the World Bank report of 2011, between Nandurbar and Pune is 317. While Pune has a rank of 39 Nandurbar is way down the ladder at 356 among all districts in the country.

The great divide within and among states in SPI too points to the urgent need for reforms in policy measures to put the house in order.

How to provide access to health and wellness to its ordinary citizens is something that successive governments have struggled with, without finding a ready answer. Even a progressive district like Chennai in Tamil Nadu (ranked third in the SPI) suffers from poor access to health and wellness with a score of 49.6. Kancheepuram district in Tamil Nadu too has a poor record in terms of access to advanced education (36.8) despite ranked 14 on the SPI. It is equally true for the industrial district of Ludhiana in Punjab.

Setting up more and more primary health centers and local government hospitals with doctors from outside, have not really helped. The hub-and-spoke model, where primary centres treat simple diseases and refer the more serious ones to multi-specialty hospitals, has failed to take off in India because of absence of trained doctors in the districts and villages.

The Chinese model of barefoot doctors — local youths trained in basic healthcare services and servicing community hospitals, and specialists taking care of the major hospitals — could be a ready solution.

Even high economic density and a decent SPI rank is not enough to lure top universities to a district. Nashik in Maharashtra is a case in point. It has an economic density of 110 and an SPI of 122, but still has a poor score of 32.2 on the issue of access to advanced education.

The best way to attract top academics to such districts is to provide them not just with a decent pay package and perks — comparable to their peers in the metros — but also quality research facilities that will help them write papers in international journals and make a name for themselves.

Delhi’s case seems to be rather unique. While one can perhaps explain its poor economic density to the government’s and Supreme Court’s decision to move polluting industries out of the capital, but there is little to explain its poor personal safety score.

Will greater policing — in terms of greater power to the police force — and more punitive and timely punishments in these districts solve the problem of personal safety, especially of women, or is there a need to change the mindset of the people through large-scale counseling? These are issues that administrators or policymakers will need to grapple with.

Why should a district like the diamond capital of India, Surat, in Gujarat, suffer from lack of access to information and communication (score: 51.38), especially in this digital age, when all information should be available at the click of a button? More so, when the district has a high economic density of 92 but also an SPI of 71.

Many of these issues like access to information is likely to be resolved once the government’s Bharat Net Project — connecting nearly 2.5 lakh gram panchayats through broadband — is completed. Proper internet connectivity will not only help those living in far-flung areas to keep abreast of what is happening nationally, but internationally too.

The reason for pointing out such stark contrasts is not just to highlight the miseries of various districts but to point out the massive differences among districts of the same state. Inequality breeds social tensions and hence constrains the growth of a nation. Hence, equity, equal opportunities for all, inclusiveness and well-being of all should be the government’s motto rather than having islands of affluence in a sea of poverty.

The article was published with Economic Times, Business Standard on August 22, 2018.