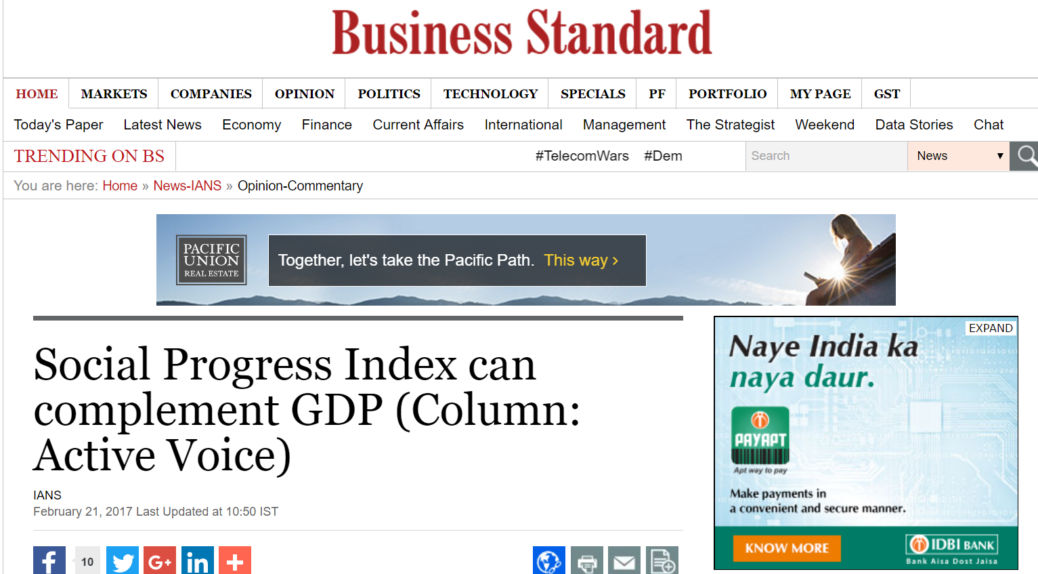 GDP is easily the most controversial measure in the field of economics. It is a measure of economic production that should have lost its relevance in a world disgusted by environmental degradation and social injustice. Despite its narrow focus, the concept of GDP has survived decades of debate on a new measure that better reflects human well-being within a nation.

More recently, the issue was raised by a panel of economists at Davos 2017 consisting of IMF head Christine Lagarde, Nobel Prize-winning economist Joseph Stiglitz, and MIT Professor Erik Brynjolfsson, who stressed GDP is a poor way of assessing the health of economies and there is an urgent need to find an alternative measure. Closer home, Bibek Debroy, member of NITI Aayog, raised a similar concern by pointing out that GDP has its shortcomings but finding an alternative summary measure is a challenge.

Both recent instances of the GDP debate seem to echo the general consensus among economists than an alternative measure is necessary. It is generally understood that since GDP is only a measure of what we buy and sell and not a measure of welfare, there is a need to replace the concept. Bibek Debroy rightly points out that income, which is the basis of GDP, is at best a means to an end. Instead, we need a measure that of the ends themselves; the end being a healthy, educated life.

It is true that GDP is not a measure of “welfare of nations” as forewarned by Simon Kuznets, the economist who had coined the concept of GDP. However, there are a couple of reasons why the concept of GDP has survived decades of attack and the formation of a general consensus of its limitations. First, despite its imperfections it is a single number that points out the level of economic activity that is taking place within a nation and gives a general idea whether the economy is contracting or expanding. Second, historical instances of bursts in GDP growth like the “Golden Age of Capitalism” for the US and the post-1960s growth of the Four Asian Tigers resulted in sudden improvements in standard of living for inhabitants of these countries. Also, the growth of China and India has lifted millions out of poverty at a rate the world has never seen before. Therefore, it became easier to associate economic progress with development.

Clearly, it will be difficult to do away with GDP anytime soon and, more importantly, it shouldn’t be done away with considering its utility in indicating economic progress. Human Development Index (HDI) made an attempt to improve upon the concept of GDP by presenting an aggregate indicator for income, education and life expectancy. However, it gives no explanation for giving equal weights to all the three indicators except for the sake of simplicity. Moreover, it leaves out many important aspects of welfare like biases against women, minorities, and low-class families.

HDI has another drawback of combining economic and social indicators, which makes it difficult to isolate the progress made by a nation on any one of the two aspects. Therefore, it needs to be understood that if GDP is limited in its measure of social well-being, it need not be completely debunked. What is needed is a measure of social progress that complements the GDP since economic progress is already captured by it to the best extent possible. Surely, it ignores economic activity that does not take place within the market like the domestic work carried out at home, but no other measure has improved upon it yet. Nevertheless, we can improve upon the status quo by introducing a measure of social progress that complements the GDP.

The Social Progress Index (SPI) can be a start. The index provides a robust and holistic framework for measuring social and environmental performance that is independent of GDP using three broad dimensions – Basic Human Needs, Foundations of Wellbeing and Opportunity. The index considers almost everything that reflects the social progress of a region (the capacity of a society to meet the basic human needs of its citizens, establish the building blocks that allow citizens and communities to enhance and sustain the quality of their lives, and create the conditions for all individuals to reach their full potential) and provides a practical tool that can help change makers to implement policies that can drive faster social progress.

The use of indicators like SPI that signal the level of social progress that a nation is making, in light of the economic progress it makes as reflected by GDP, can be a practical solution to the endless debate surrounding the relevance of GDP. Apart from reflecting the actual well-being of a nation and focusing on the ends along with the means, the combined use of indicators also furthers our understanding of the relationship between social and economic progress. Unlike HDI, it gives a better understanding of the aspect of development that a nation needs to focus on; be it economic or social.

The Occam’s razor for the GDP debate lies in acknowledging the relevance of GDP and complementing it with an indicator that covers the aspects that it misses out.

The article was published in Business Standard on February 21, 2017.